Win a Street Fight Using One of These Three Karate Techniques!

I have used these three karate techniques for decades, and I find them invaluable. In fact, I am one hundred per cent sure that these are the three martial arts techniques you must master if you want to win a street fight…and I mean any street fight. 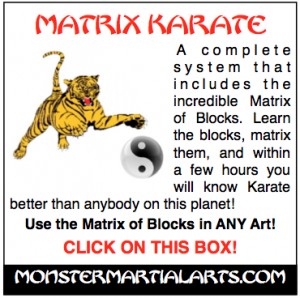 Mind you, I figured these things in tournaments years ago, and they can be used in tournaments, but only if you use proper control. Use them on the street however, defend your life, and you must use them full out.

The first technique is to break the fingers when you are closing in. Many people will have open hands, not always, but enough to where this technique should be paid attention to. So when you close the distance, assuming you are not kicking first, you must slap down on his fingers with a backfist. If you can break his fingers he will rethink everything, and he will have one hand that is pretty much useless.

Second thing, goes right along with breaking fingers, is to force his hands (arms) down. Push them downward, so they are trapped and he can’t use them, and you are going to have a heck of an advantage. This is actually the theory behind Bruce Lee’s famous ‘Straight Blast.’ He would literally ruin at people, sprint at them, shooting punches so that they rode over the arms and forced them down, so that his punches would be unimpeded on the way to the face.

Third, make him blink his eyes. This fits right in with the shooting motion of the hands as you go for broken fingers and trapping hands. If you can shoot the fingers to the eyes, and hit the eyes, then you are going to be fighting somebody who is blind. What could be sweeter, eh?

But even if you don’t manage to blind the mugger, if he blinks his eyes, thinks backward in his mind, then he will be pulling your strikes to his face and not even thinking about defending himself, or even countering. Now, these techniques I discovered in tournaments many decades ago. And you can still use them, but be careful. You don’t want to break your partner’s fingers, but you do want to slap his hands down. And you don’t want to blind him, but you do want him to blink his eyes.

So practice these karate techniques, learn how to use them, and you will never lose a street fight.