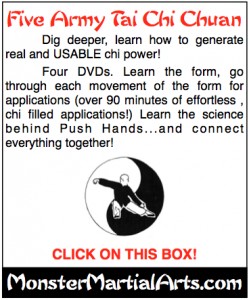 First thing to do, one must drop the body weight down. But, really, this is not just sinking the weight; to understand this just close your eyes and course your awareness down into the ground. This will enable you to create and drive a tractor beam into the ground.

Second in this procedure, you must shift the weight, then rotate the hips. You are trying to do one thing at a time, and therefore concentrating all your awareness on one thing at a time. This will ensure that you are distracted by splitting your intentions.

Third in this procedure, you must hold unbendable arms throughout all motions. There will be a slight in and out movement of the limbs, a slight wave of the arms, which will cause energy to wave. Unbendable arms need to draw on energy if they are going to build on energy.

Fourth in this procedure, you must pulse not just the arms, but the whole body. Push your awareness up the legs, rotate with the waist, and then wave out the arms. Do it in this exact sequence for every single movement, and learn how to push energy through your body.

Fifth, you must learn to relax. Relaxation is the most important thing in all the martial arts, as energy will flow easiest through that which is relaxed. And, this will lead you to higher levels of the martial arts, for being able to relax creates an emptiness within the body through which awareness will flow.

These are actually the rules for creating energy in all martial arts styles. Do these five things with Pa Kua Chang, or Hsing i, or that esoteric form of white crane chi gung, and your body will become more than flesh. It will transmogrify into a power body, a kinetic energy body, and it will become capable of feats far beyond the dreams of a simple physical cultist.

The key here is to believe that you are not just flesh, that you are a spiritual being, and that there is a link between the flesh and the spirit. That link is the energy body, and that link can be forged through the five rules listed here. That and a patient practice of such martial arts as Yang Tai Chi Chuan, Chen Tai Chi Chuan.

Dig Deeper into your Tai Chi Chuan. Learn the scientific methods of Matrixing. Head over to Monster Martial Arts.