How Matrix Martial Arts was Born 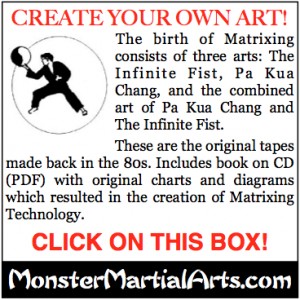 I was going over various things
having to do with matrixing,
and I realized something,
many people are coming in late,
I’m talking about the latest things,
and they don’t know anything about
the beginnings of matrixing.
So,
I need to fix that.
One of the first wins I ever got
was from a fellow name of John Champion.
Most people never heard of him,
but he produced the old TV series
McHale’s Navy.
And,
the old television series
Laramie.
Before that he produced movies
worked with people like Audi Murphy,
Linda Darnell, Joel McCrea,
Sterling Hayden, Ward Bond,
and a slew of other big time names
from the fifties.
Before that,
he wrote screenplays,
directed,
and all sorts of other stuff.
When I met him he had had a heart attack.
Actually had something like a quarter of his heart removed,
Here’s his win.
March 6, 1985
Dear Al:
Having suffered two severe coronaries, resulting in an inoperable condition, I am forced to take eighteen pills a day to stay alive. As a result, at 62, your training methods seemed to have nothing to offer me. In fact there appeared to be genuine risks in my getting involved in any rigorous physical discipline.
I’m pleased to report I was wrong on all counts.
After only ten work outs with you, my condition has improved greatly. Something else amazes me even more. I’m able to grapple with and frequently solve mental problems that were completely defeating me six weeks ago.
Thank you for your invaluable help.
Sincerely,
John Champion.
Now,
I taught John The Infinite Fist
from the Create Your Own Art Course.
Honestly, he was so weak and fuzzy brained
it was a work out
just to get him to move.
But,
the logic pulled him through,
and by the time 20 lessons had passed he had done
pretty much everything on the Create Your Own Art course.
We didn’t get into big takedowns,
but we did go into weapons a bit.
This because he walked late at night with his wife
and wanted self protection.
One day he held out a golf club,
asked me if that was a good weapon.
I said something like,
‘not for blocking.’
He held it over his head with two hands,
told me to hit him with one of my wooden swords.
I laughed,
took the club out of his hands
and snapped it in my hands.
We laughed as he realized that
if I had swung my heavy bokken at him
he would have massive head injuries.
Eventually,
he looked at one of my scripts,
offered to buy it,
and then he told me that he would make me a producer.
I wasn’t interested at all,
I wanted to do martial arts,
not produce movies,
which actually seemed to upset him.
He couldn’t understand how I could turn down
the chance at riches and power and gorgeous movie stars.
I couldn’t understand
how anybody could be waylaid
by such superficial things.
Anyway,
he was a tremendous fellow.
Now,
the Create Your Own Art course
has the original research I did.
In the beginning
I wrote long lists,
I filled hundreds of notebooks with lists of techniques from various arts
and combinations of arts,
just trying to make sense out of it all.
Eventually,
I stumbled across the actual formula,
the matrixing table
which made all lists obsolete.
Simply,
a couple of matrix tables
created all the techniques I had been tried to sort through,
and I ended up throwing away a couple of hundred spiral ring notebooks
filled with lists of techniques, forms, drills,
and everything I knew,
but couldn’t make sense out of.
Matrixing provided me with the logic
to see everything…
everything in the martial arts
could be fitted into a little matrixing.
So Create Your Own Art has the three arts I used,
it has a couple of the old lists I used,
and which had proved particularly helpful
in making the first matrix tables.
The problem with it is the grainy, ancient video technology.
You can understand what I am saying and doing,
but it is blurry.
The other problem,
if you consider it a problem,
is my youth.
Simply,
I was not polished
as a writer or public speaker,
and I tend to judge myself for that.
Still,
the thing to remember is that
my lack of personal polish is not what we are looking at,
what we are looking at is my enthusiasm,
an enthusiasm that was so overwhelming
that I turned down Hollywood offers
just to do the martial arts.
Now,
to be truthful,
I usually recommend Matrix Karate
as the first course,
because it has the matrix tables in it.
But,
there is incredible value
in seeing the source material,
getting a look at what I was doing
and what led to me figuring out
the matrixing tables
and how they worked.
That’s the story,
and I’ll probably write a lot more on these early days.
Heck,
I like thinking about the fun I had,
I like sharing it,
and I know it helps people,
gives them some reality on what I went through
to figure this stuff all out.
Now,
as I said earlier,
turkey day is past,
time to work out,
get rid of the fat
before Xmas comes
and we get fat all over again.
Thanks,
and I’ll talk to you later.
Al
http://www.monstermartialarts.com/Create_Your_Own_Art.html