To Mix the Martial Arts, or Not!

The fact is, whether you study kung fu or kenpo, aikido or escrima, every martial art that is in existence is a put together, a mix of jujitsu or shaolin or whatever. 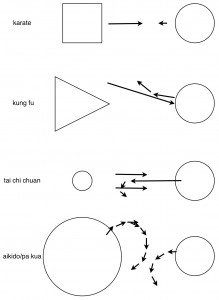 Can you mix martial arts like these? Monster Martial Arts did!

Every one of those ‘ancient’ disciplines is a mix. I quoted ‘ancient’ becuase most martial arts are not ancient at all.

Kenpo was invented (put together from other arts) by Ed Parker some fifty years ago. That’s not long.

Karate is a mix of kung fu styles.

Escrima is a trade off between tribes in the Filipines, and so on.

Simple, every art is a conglomeration and collaboration of other arts.

The latest mixes are quite interesting. They are the ones that pop up on the net. You know the ones I mean, ‘I beat Eight Ninjas Using a Secret Technique Taught to Me by Himalayan Nuns!’

And the guy who is selling this mess puts together a sampling of techniques, ties them together with a loose vrsion of a scientific theory, and calls it by a pseudo scientific name. Something like, Minderg Fighting concepts. Or, Psychop Blitzes.’ Something that sounds scientific, but is just rehashed theory, ancient languages translated into gobbledegook designed to befuddle any who ask.

And those who don’t ask are impressed (they paid money, they have to be impressed, right?) and they tell their friends, and somewhere in there somebody gets a bright idea, starts teaching, and says he has founded a new system.

Truth, sometimes there is a good system. Heck, if somebody puts in the hard work, distills the crapola, he’s going to find the grain of knowledge that started the crapola on its journey.

Well, that’s about all I’ve got to say.

In spite of all the bushwah out there, one should study the various systems, and he should mix martial arts until they make sense, and the best system I have seen is the Matrix Karate system by Al Case…that’s one that works, and actually is scientific!