Now it could be Kung Fu Lessons, or Karate Instruction, or Taekwondo online, or any number of beasts, but it is all the same. It could be the backs of comic books or late night infomercials, but you know what ‘m talking about. You can have the power to destroy eight skinhead neo-nazis with a single secret technique that has never been seen before! 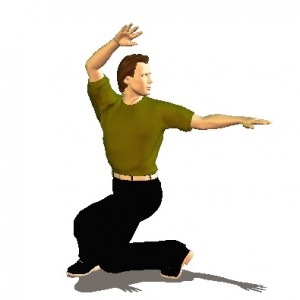 The Dragon is one of the Five Kung Fu Animals

Now, the odd thing about all this is that some of these things you see on the net actually work. Some of them are the product of dedicated martial artists. Unfortunately, it is still a ‘buyer beware’ market.

The plot line for these productions is pretty predictable. First build some empathy with the crowd. Since everybody grew up and encountered bullies, telling the crowd that you used to be picked on by the bullies is a pretty safe bet.

Now, you’ve put the idea of being picked on in the rube’s head, the second step is to give him a way to solve the problem. You’ve got to convince him that if he studies your method he will be capable of beating up the bullies. This magic formula, if you think about it, is at the heart of every kung fu movie ever made.

Now, except for the taking his money part, you’ve basically got it all scoped out. It is all that simple. Sell him a problem, give him the solution, take his money. Or, if you want to get egghead, suspend his belief, lead him to a fantasy, take his money.

Now, to be honest, some products deserve to be sold, and some should be avoided, and the way to figure out the difference is simple. If the pitch follows a script, you might want to avoid it. A guy who follows a script has done his research as to what works, and he is trying to make money.

The other alternative is the guy who doesn’t follow the script, but who actually communicates to you. It is not a script, but a voice that has substance. It is a guy who believes in the art, and is selling out of compassion and belief.

This is not to say that there isn’t some gold in some of the Snake oil Kung Fu Lessons, of Karate Instruction, or taekwondo Online, or whatever. Be it prison fighting or ghetto blasting, or secret spetznatz techniques taught at midnight by an ancient Mayan nun…there could very well be some juicy stuff, or even a new way of looking at things. Sometimes, you know, Snake Oil really can work!

The purest art is the one you create yourself. Check out Create Your Own Art at Monster Martial Arts.

This has been a page about Kung Fu Lessons