How to Do a Gun Self Defense Using Martial Arts

How to do a Gun Self Defense Technique!

I had a chance to use this gun self defense technique some years ago when I was teaching a martial arts class. I had a student whose father would go to the bar next door and get a little tipsy while his son was getting strong and healthy. One day, after the class had ended, the father staggers in, and he actually has a gun, and he points it and tells me that that martial arts crap won’t do me any good if a guy has a gun. So I took the gun away from him and grinned. 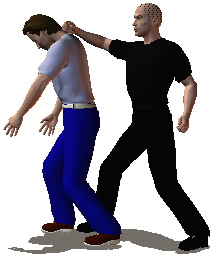 I got your gun self defense right here!

Yes, it is possible to take a gun away from an attacker, even when they are pointing it directly at your nose. I took gun away, and I will tell you exactly how I did it in this article. That said, I recommend giving your money to an attacker, not risking your face against volatile discharge. When somebody aims a weapon at you, you must consider which way the communication is going. The typical scenario is a fellow points a pistol at you and he says he will shoot. The direction of this communication is towards you.

Moving in a way that demonstrates compliance, you can lift your hands, and put them in a position that is best for what you are about to do. I have to tell you that you will have to work this a bit to figure out what position is best. The most important point, however, is to calm your mind, and relax your body.

Now, the fellow says to give him your wallet, and this is the point you have been anticipating. The communication is now going towards him, and away from you. He is not intending to shoot because he expects you to move towards him.

The trick behind this gun self defense technique, as I said, is to have utterly calm mind and totally relaxed muscles. Move your head to the side, away from the direction the gun will move in when you hit his wrist. Slap the inside of his wrist as you grab the gun.

Striking the inside of his wrist like this will mess up his muscles, and there may be a discharge of the weapon, but the gun should now be angled away from you. With practice this technique, and with the ability to be relaxed in one position in space, and then to be in another position in space, you can actually refine your technique and try different methods of making a gun self defense technique work

Let me say, however, that the technique won’t work if the fellow is too far away, if he is more interested in kidnapping you for purposes of domination than money, or if you just read this article and never practice it a few thousand times. The reason I wrote this article is for purposes of enlightenment in dire situation, for training purposes, not to give you the idea that risking your life for money is a good idea. And, I want to let you know that when the fellow is  caught and goes before the judge, it is going to be a lot of fun to go point a little laughter at him.