Light Gung Fu Can Be Made Out of Any Martial Art

It’s true, Light Gung Fu can be made out of any martial art you study, and that includes Karate, Silat, Aikido, whatever! In fact, it is incredibly easy!

All you have to do is go get some cinderblocks, set them on end, and do your forms (kata) on them! Instant Light Gung Fu! 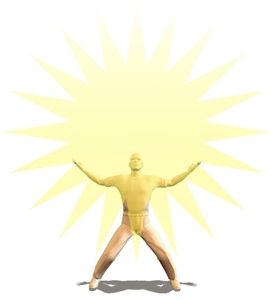 But whatever you believe…chi energy power exists!

Here are some key items to help you out in this search for light body Gung fu.

You don’t need a lot of cinderblocks. As little as four, but you can use as many as you want.

It is best to lay them sideways the first few times you do this. After you are comfortable (won’t take but a day or two), you stand them on end. After a week or two, you can lay two on the side. Then you can go to one on end on top of one on end, and then two on end, and so on.

You want to pick a good surface to eliminate brick wobble. And when you purchase the cinder blocks, set them on end and pick out the ones with the most stability.

IMPORTANT: when you fall, learn to pick up your legs and search for a place to land. You don’t want to break a leg by stepping on the falling cinderblock.

Now, this method of light Gung fu has been around for years. It is called sunken post, or sunken pillar training. Usually you dig holes and sink them, and climb the poles until you are six or eight feet off the ground, striking Gung fu postures and dancing around like a kung fu crane.

Nothing wrong with the ancient sunken pole tricks, especially if you are an official Gung fu school, but, my method of light kung fu is much simpler.

Now, the main area where you grow is going to be in balance.

So standing on a couple of cinderblocks on end is going to give you tremendous balance.

First, you will feel awkward, the body will shift back and forth in attempts to keep your balance.

After a while your kung fu maneuvering will become easy as pie, and it will be as natural as walking, and you will likely feel a nice, little glow developing in your tan tien.

The muscles on both sides of the leg, you see, are going to fire up, work back and forth, and that will start up the body energy generator, which is what the tan tien actually is.

And that is how you create light Gung fu out of Karate, or taekwondo, or pa kua, or…ANY…Martial Art you might happen to study.