We Were Young and Being Tough in the Martial Arts!

Back then we were young, and we were always being tough in the martial arts! We pounded telephone poles until we had respectable calluses! We took hammers to our shins, and we supported our local dentist! 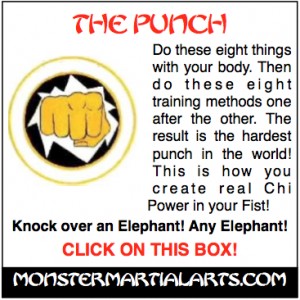 One time a fellow I knew went to a Karate  contest. During the course of the tournament his fingers were jammed so that the second knuckle was back on top of the third bone. He laughed, pulled it out, put it back in place, and kept going!

But my favorite ‘tough story’ was the time a friend of mine named Dave decided to go on a television show. He was opening a karate school and a little local programming could go a long way. His mistake was in asking his friend Bruce to help him.

“Yes,” said Dave into the TV camera, “we believe in sincerity and virtue. No, children who study karate don’t start getting in fights, they start avoiding them. Yes, discipline is what the martial arts are all about.”

He should have said humor. A short time later Dave and Bruce began to demonstrate their karate. They did some forms, and a few self defense techniques, and a little freestyle, then it was time for breaking.

All was going well. That was the last break and Dave planned on ending the demonstration, but right in the middle of his bow Bruce made another announcement. “And now Dave will break two boards with a spearhand.”

Dave couldn’t break two boards with a spearhand! He had never tried that technique! But he was actually on TV with thousands and thousands of viewers watching!

KIAI! The boards broke with apparent ease. But so did the bones in Dave’s fingers.

But Dave was a hard charger. He even shook hands with everybody on the way out of the studios. He didn’t show a grimace or groan, and nobody knew he went straight to the emergency room.

Later, Dave asked Bruce why he had set him up like that. Bruce said, “I just thought it would be funny!” And that is what being tough in the martial arts is like.