Five Steps to the Hardest Punch in the Universe!

The Hardest Punch Is Something You Have to Have!

What is the difference between your punch, and the hardest punch of somebody like Mas Oyama, who could kill a bull? If you dissected his body you wouldn’t find any significant differences between his fists and yours. So what did he have that you don’t have. 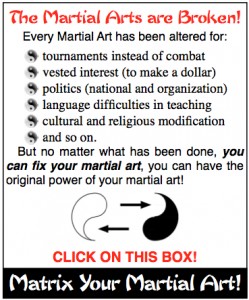 What he had, aside from a humungous helping of belief in himself, was the correct data on how to make a punch. That he had the data was obvious, for he couldn’t kill a bull without this data. Here is the data that he had to have.

Second, you must push with the legs when throwing that punch. This puts the entire body weight into the fist. Your choice is an arm punch, maybe twenty pounds times velocity, versus a body punch, your body weight times the velocity created by your leg push.

Third, one must align the hips properly. All to often people actually turn their hips the wrong way, and break the line of energy from the fist to the earth. To test this, simply have somebody push on your extended fist and turn your hips back and forth until they feel strongest. 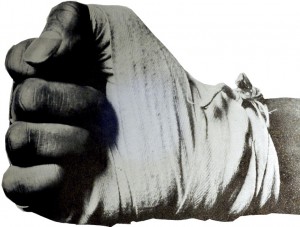 Fourth, One must keep the shoulders down. If you raise the shoulders the energy goes up at the shoulder, and not down through the body and into the earth. Again, have somebody push on your extended fist and raise and lower the shoulder until you can channel the flow of energy easily and without effort.

Fifth, you must snap the arm and close the fist on impact, and ground and push with the legs, and turn the hips, and keep the shoulder low, all at the same time. This is called using the body as one unit, or, as I call it CBM–Coordinated Body Motion.

Okay, that’s it. You’re ready to hop that fence and blow your red hankie at that 500 pound soon to be hamburger named Otis. Don’t worry, I’ll film the whole thing from this high branch over here. I’ll have your hardest punch on film.

One response to “Five Steps to the Hardest Punch in the Universe!”