When You Teach Kids the Karate Tiger Story is Helpful

I find, when teaching kids, that the Karate Tiger Story is pretty useful. Here it is.

“Al, I’m tired.” I looked at the youngster and knew that he wasn’t tired, he was just being childish. The problem was that he had chosen to be silly right in the middle of my karate class. 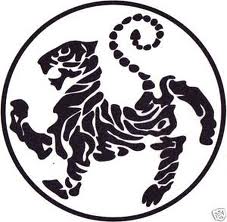 When one of these future leaders’ of society interrupts my class in this fashion I always feel peculiarly irked. I get a desire to pick up that large stick with a nail in it  that I keep in the corner of my school and…but I don’t. Instead, I tell them the story of the tiger, which has been told before, but which I will tell you now in my own inimitable fashion.

One day two monks were walking through the jungle. One was old and one was young, and they were on their way to a far temple. The younger one said, “I’m tired–can’t we stop?”

“No. I’m tired. I’m stopping,” and the younger monk sat on a boulder and began to fan himself.

“We have to make it to the next temple. Get up now!” The older monk implored the younger man.

“No. I’m just too tired to walk!” The younger monk kept fanning himself.

The older monk, seeing a tiger sleeping in a nearby bamboo thicket, picked up a rock and threw it at the tiger. The tiger jumped up and chased the two monks. The monks ran like…well…like a tiger was after them.

The monks managed to get away from the tiger. When they were safe the younger one turned to the older monk. “Why’d you throw that rock?”

The older monk laughed. “I guess you weren’t too tired to walk after all.” The younger monk finally recognizing superior wisdom, began to laugh, too.

There is a moral here. The monks were running for their lives. The tiger was only running for his dinner.

Which brings us to my words of wisdom. Do you treat every day like it is a run for your life? Or do you pretend that life has bigger teeth than you?