The Inside And The Outside of Real Tai Chi Chuan

It takes three lifetimes to learn Karate. I heard that one when I first began the martial arts, and it takes on new significance when you consider real Tai Chi Chuan. I mean, you do Tai Chi slow, so it’s got to take longer to get there than something like karate, so to learn Tai Chi has got to take something like thirty lifetimes, right? 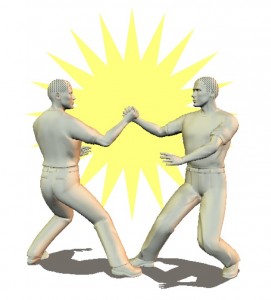 Okay, I’m pulling your leg. We all know that Tai Chi, because it concentrates awareness, should be faster and easier to learn than one of the faster arts. Right?

The truth of the matter actually hinges on something rather interesting. To get to this interesting something we have to consider that there are two viewpoints when it comes to Tai Chi Chuan. There is the inside viewpoint and the outside viewpoint.

Inside, like inside your body. The viewpoint from inside your cranium, as if you had to use your eyeballs, as if you were a meat body. Like you are not an immortal spirit taking residence inside a body.

Outside, like outside your body. The viewpoint from slight, or more than slightly, outside your body, as if you were a spirit and didn’t really need those eyeball things. Like you are immortal and merely renting that meaty thing with all its sweaty urges.

One does the martial arts and immerses themselves in the day to day operations of the beast. How do you peel an apple or teach a kid or…these fingers and toes…how do they really work? And as you learn to operate each unique and individual part of the body something strange and wondrous  occurs.

Strange and fascinating if you learn through the martial arts, for the martial arts impart the second viewpoint, the outside viewpoint. People doing other arts, like ballet and gymnastics, don’t really get this viewpoint, for those skills do not force one outside his body. Or, perhaps they do, but there is no measuring stick so they don’t really know that they are getting outside their body.

But you do get outside your body by practicing the martial arts, and especially Tai Chi, but mostly by studying enough martial arts to learn all the viewpoints to pop you slightly out of that meaty runaround you are in. Then you stop aging as drastically as the artistically challenged, and you lose this weird thing called reaction time, and you start picking up on other people’s thoughts, and all sort of other sixth sense types of abilities. And if you don’t get all these abilities, maybe you are stuck in a slow version of the art, that really does take three lifetimes, and if that is the case, Real Tai Chi Chuan takes about three months, or so it is rumored.