Matrixing as a Method for Learning Martial Arts Faster

While learning martial arts, such as MMA is popular, there are problems with it. Let’s be honest, while some fellow is using Jujitsu, he is rolling around and vulnerable to an attack from his opponents friends. Not to mention that it is not always the most intelligent thing to roll around on the ground with some fellow who has a knife or broken bottle. 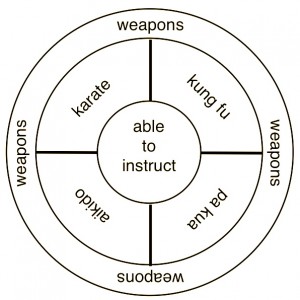 Each Art is but a Piece of the Whole Art

I know I have offended some stylists out there, but these are questions that you cannot run away from. After all, the ring looks ferocious, but biting is a problem on the street. And getting your fingers broken or your eyes gouged is always a possibility if you are trying to do some Brazilian Jujitsu on some fool.

No, it is better to keep a distance, be able to evade, manipulate, and even run. Yes, you have to watch what kind of a surface you are on, but mobility in warfare is extremely important. And talking mobility, we are talking something like Shotokan, or Shorin Ryu, or Kenpo.

The problem is that people have bought into the idea that it takes decades, a life time, to learn good Kung Fu, like Shaolin or Mantis. But it doesn’t. All you have to do is find a system which understands the most important principles and concentrates on those principles.

We are not talking Jeet Kune Do here, because we don’t want a grab bag of sample all and take what you need. What we want are the actual core concepts of the art. We want the truth of such arts as Hung Gar or Choy Li Fut.

And here’s something most people don’t understand, logic leads to prediction to intuition. Those sixth sense abilities of the martial arts are hard to find, but they don’t need to be. Once you start matrixing your martial arts, and I don’t care if it is tae kwon do or one of the Korean Kwans, your sixth sense abilities, your ability to understand and produce such things as chi kung, sometimes called gi gong, will start to blossom.

Al Case began his study of Karate in 1969. Take advantage of his 45 years of knowledge. Check out Matrixing at Monster Martial Arts.