Gichin Funakoshi, the founder of modern Karate, was about 80 years old, and was out for a lat night stroll. The night was gloomy, Japan was in a state of unrest, and he saw a thug lurking on the street corner. And he knew, just knew, that that thug was going to try to mug him. 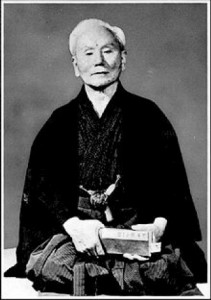 Hey, you think a mugger’s going to pick on somebody big? Nah, these bad guys want to do their work with the least amount of risk, you know? Smart guys, these muggers.

Anyway, Gichin keeps on walking makes sure he looks aged and shaky, and as he passes the mugger and the mugger leaps at him he whirls and grabs the mugger. Now, you might be wondering where he grabbed the mugger. A death lock on a highly specialized pressure point–a nerve center that immobilizes totally?

Well, uh, not exactly. He grabbed him by the, um, chestnuts. The cajones, you know..the apples.

He grabbed him by his future, his children to be, his only reason for fun on those long, lonely nights when the mugger when is all alone and can’t find a date. Now the founder of Karate is holding a mugger firmly by the embarrassment what is his next technique? Does he execute a half fist to the throat and pop the Adam’s apple…or at least shove it down the unworthy’s own throat?

Does he spear hand the chest and extract the mugger’s heart out and take a bite while the horrified mugger watches in horror? Or does he just…squeeze. Slowly, squeeze, and watch the blood drain out of the mugger’s face, and the life out of his body, and the joy out of his future?

Squeeze…so that the nutty pulp seeps from between his gnarly fingers. Squeeze…until a loud popping sound fills the night air. Squeeze, until the mugger screams like a little girl and falls to the pavement, never to enjoy loving again.

Gichin called for the cops. Yep, he stood on that corner and held that man and called for somebody to come help him. And the mugger was totted away to think about his crimes, and the terror of having his manhood held by another man.

Yep. My martial arts students have heard me say this phrase, and they know what I mean. When you have a choice of a long walk down a lit street, or a short trip through a dark alley, take the long way.

You can tell you’ve made it, that you do understand what the martial arts are all about when you can see a dark alley before you reach it. Hey, a sunny street might be a dark alley if there’s some idiot laying in wait for you. And you should have developed the extra perception, through those endless hours of practice, to know the difference between a dark alley and a well lit street.

One response to “Funakoshi, Dark Alleys, and Grabbing Mugger Cahonies!”