Pan Gai Noon is the Kung Fu that became Karate

Pan Gai Noon means ‘half hard/ half soft.’ It is an old Chinese kung fu with a difficult to trace lineage. It resulted in the art of Uechi ryu, and has had impact on all Okinawan and Japanese styles of martial arts. 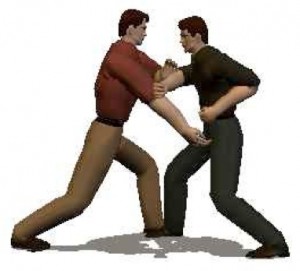 The real secret is to apply what you learn

Pan Gai Noon consists of three specific forms. These forms are called Sanchin, Seisan, and Sanseirui. There is a specific reason for each form.

The Sanchin is a power form. A student is taught to hold his stance and walk, and perform three simple, yet difficult to understand movements. These three movements are the secret of the first form of Pan Gai Noon.

The first movement is a simple thrusting of the hands. This movement is done twice through the form, and it represents a single line. It does not have to be done so hard you suffer whiplash, it can be done gently, as long as you put your mind and intention into it.

The second movement is a circular blocking movement. It is set up by holding the hands, palm upward, in middle blocks. You then make a horizontal circle of the hands which ends with a slightly angled thrust of the fingers.

The third movement is done towards the end of the form. You simple execute a pair of palm blocks, low and across the face. You then circle the hands in a vertical fashion, and slowly push (thrust) the palms forward.

That’s right, the three movements of Sanchin, the first form of Pan Gai Noon,  describe the three axis for a sphere. The three movements define the x axis, the y axis, and the z axis. A sphere of energy, held in the hands of a martial artist, which can absorb all attacks, and yet, through a concentrated spear hand, offer an attack of devastating power.

5 responses to “The First Secret of Pan Gai Noon”