We’ve all heard the tales, guy hits the master and breaks his hand. Knives are blunted upon the master’s body. And, during the Boxer Rebellion, bullets bounced off bodies. 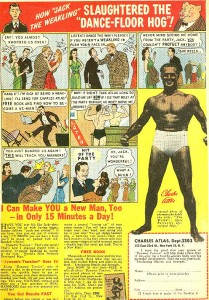 Over the years, most of these myths have been proven to be false. People died in the Boxer Rebellion, victim to bushwah propaganda and fantasy. And, if there are any fellows out there who would like to blunt the tip of my Cold Steel, send me an e-mail and a release form.

However, bushwah aside, there are a few methods which aid in creating a tougher body, harder strikes and blocks, and so on. The question, of course, is which method works the best?

When it comes to hand conditioning, Chinese Kung Fu preach various iron palm potions, if you soak your hands before and after working out, the tissue remains pliable and yet still retains the value of the work out. Thus, you can pound on beans and sand and pellets of iron until your cup runneth over. My only problem with this method is that I believe in methods which don’t rely on the body, I prefer methods which use the power of the mind.

Tai Chi, for instance, speaks of a pliable body which has power that is soft on the outside, hard on the inside. I think this is probably preferable to bruise potions, but one would have to spend a lot of time studying the various Tai Chi arts to attain what one is seeking. Be prepared to study Chen for power, Yang for workable posture, Wu for subtle motions, Sun for twisting effects, and so on.

Now, to be truthful, just doing karate forms is going to give you an ‘iron body.’ The problem is that most people do the forms wrong, so the benefits don’t always accumulate. But, if you can find the correct way of doing forms, then you can, within the space of about two years, learn how to maximize energy within your body to withstand a strike, and concentrate energy into your hands for striking.

The best way of developing power, without the need for secret knowledge or magic potions, is simply to set up a stand which supports a brick, and drop the palm on it. Place a folded wash cloth over it to protect the palm, and don’t strike too hard, just drop the palm. The trick is to be willing to do it for an hour a day each and every day

I know people will have other methods, and I am always fascinated by what people prefer in this matter. The things I have said in this article I have formulated over four decades of inspecting a variety of martial arts. Whether it is iron palm, iron body kung fu, or whatever, there is value in pursuing these strange and esoteric methods.