The deadliest Martial Arts concept I know is also the one least used. I am talking about the manipulation of space. Space, if properly used, can win any fight. 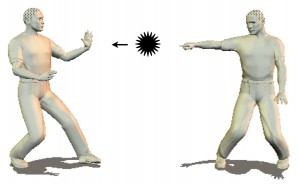 Space is emptiness, is nothing, is the absence of any material substance. Space is also the greatest conductor of visual perception any light beam knows that. Space is zen and most martial artists don’t’ really know how to use it.

Space is utilized when you launch ‘negative energy’ strikes. Simply, by taking energy out of your strike, and throwing the mass of the body, unaffected by energy and emotion you can strike ten times harder. The idea here is to consider your body an object and throw it at your opponent, and let it collide.

The space described in the last paragraph is the space created by not having consideration for your fellow man. I used to call this The Dead Strike, or the Empty Strike. Not because it caused death, but because there was no consideration for life when I threw the mass of my body at somebody.

The most important space in this whole concept is the space of your thoughts. Thoughts don’t occupy space, so you should concentrate your efforts not on moving by muscle, but on having the thought that create motion. By reducing muscular effort and moving by thought, you will find your ability to move faster and faster unleashed.

Thought, the final frontier. Thought if the source of all motion. Relax, create space, and learn how to create and shape your thoughts, that is the True Secret of the Deadliest Martial Arts Concept I know.