To learn Pa Kua Chang Quickly and easily, the first idea you are going to have to unlearn is the idea that it takes decades to learn such arts as Tai Chi Chuan or Pa Kua Chang or Aikido. Look, the army makes soldiers in three months, and that includes some high tech weaponry. And, when you add up the actual hours spent on that college course, it doesn’t take that long to make a scientist or mathematician. 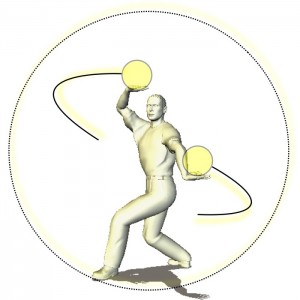 Now, to learn pa kua chang you need to draw a circle about six feet wide, and which takes exactly eight steps to go around. You need to situate the circle so it is squarely in the room, which means that if you stopped walking and straightened up every two steps you would face a wall. Now you need to isolate a weekend to master this thing.

The first rule in walking the circle is to keep the hips low and move them at an even rate. The second rule is to breath evenly and synchronize the movements of your hands and feet so they move at the same rate of speed, starting and finishing techniques at the same time. The third rule is to be willing to isolate yourself as separate from the regular universe, let your attention slide off the tables and chairs, the trees and fences, and even people, as you walk around and around.

Now, you need basics that actually work and make sense and are logical. Examine karate for basic blocks, and curve the arms to adapt them to Pa Kua Chang. Things can get complex, so I would recommend taking the four basic blocks, hi, low, in and out, and working with them to start.

Now take a step and do a block, searching for the largest circles you can make with a basic block. Though you have only taken one step, let your body turn to the maximum. When you reach the end of the turn, reverse your turn and start a second block. Take a step with that second block, and, again, overturn to the max.

Keep the hips tucked to avoid injury to the lower back, place the feet flat, as if trying to be stable in a field of mud, and search for grace. Be a deadly ballet dancer, slowly whirling and spinning, exploring the limits of your body. Ignore any self-doubts, and let a few hours expose Pa Kua to you.

The last thing is to search for function, but this is important because if it doesn’t work, you shouldn’t be doing it. So have a friend strike slowly at you, and walk a small circle around him, letting your block encircle his limb, and you will find all sorts of stuff. Now, I know this all sounds simple, but let me make a point…this is exactly how such arts as Tai Chi, Pa Kua and Aikido were discovered in the first place!

There are three simple but complete systems in the Butterfly Pa Kua Chang course offered at Monster Martial Arts.