I originally wrote this article for a Taekwondo magazine. It demonstrates one of the methods I use to analyze techniques. I usually teach a form, then the applications, then the freestyle, but you need to see how deep I go into a technique

Just below is the ninth movement (third actual technique) of the form Dan Gun. I was originally taught this move in the form Pinan 2 (Heian 2), in the old Kang Duk Won, which was one of the original schools of Taekwondo. 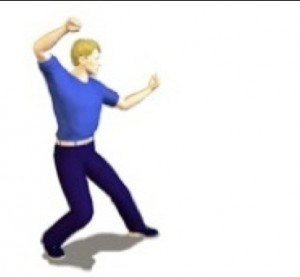 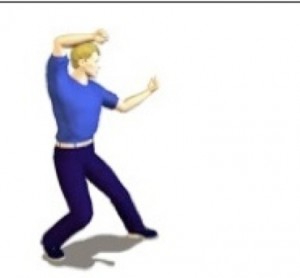 It’s interesting to see how the forms, and the movements of the forms, have developed over the years. One would think that there shouldn’t be much variation in a form, but there is. 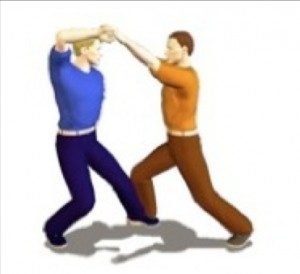 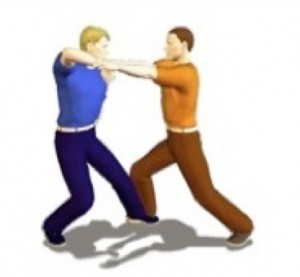 The reasoning behind this interpretation is that, number one, it is a high block, and, number two, that if somebody was to press on it, as they do in the next two images, the block would give way. Thus, when leveled, or parallel to the ground, contrary to how many schools of art do this move, it doesn’t work.

Of course, while this interpretation has value, it is still but an interpretation, for the angling of the body takes the high block out of the action and then one must question it’s value. Is it a block? A threat of secondary strike? Is there some other function? 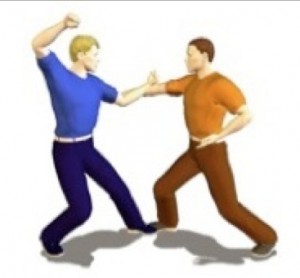 Leaving the question of some other function for a moment, let’s consider the first technique I was taught for this move, which is in the third set of figures.

The attacker executes a right punch, and the defender steps back and applies the ninth movement of Dan Gun (Pinan 2) by making the lead arm into an outward middle block. 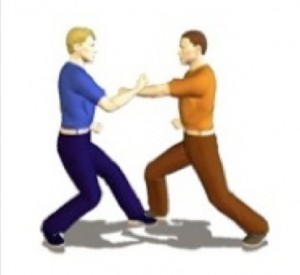 The attacker launches the left fist for his second strike, the defender brings the high block down into a middle inward block.

The Defender then launches his own counterstrike, a punch to the body. The punch follows (goes under) the line of the attacker’s arm, thus becoming difficult to see. This is what I call a ‘hidden fist’ technique. 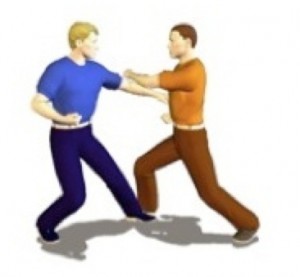 Obviously the preceding variation is more than Dan Gun, and strictly out of the form Pinan Two. Still there are so many more things that can be done. To robot the moves of the form, and not search them for other techniques is sheer blindness. It is like reading a book without understanding the words.

Below is the second technique I was shown, which demonstrates how a basic move can be extrapolated into variation. 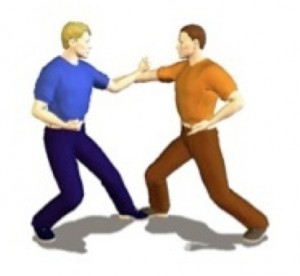 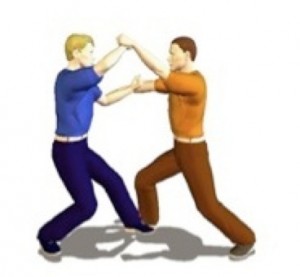 The attacker steps forward with the right fist, and the defender steps back and executes just the front hand of the Dan Gun move, an outward middle block.

The attacker then launches a second strike, a punch to the head, and the defender raises the rear arm upward in a high block. This is not in keeping with the angle of the body in the original move, but we are using both arms in a semblance of what is presented in the first move. 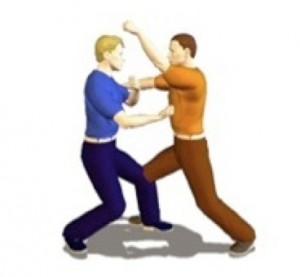 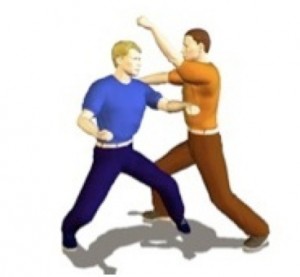 The upward motion of the rear hand does not stop on the high block, however, it circles all the way around to execute an uppercut to the ribs. One has to evaluate how long the front hand should hold its position. While the optimum would be to synchronize the uppercut with the retraction of the front arm, one must make sure the attacker’s punch is not released too soon, which would allow the attacker further attack at disadvantageous time.

The last move would be to shift the body weight into a horse stance while executing a hammerfist to the stretched ribcage of the attacker. One can search for pressure points, but the power of the horse stance should do the trick.

As one examines the Dan Gun movement, and the techniques just presented, one can come to the conclusion that there is a certain amount of static (unmoving) posture to the technique, which is to say it requires the unmoving commitment of the dummy to work…and you aren’t going to see it on the street.

However ‘poser’ it may be, it still provides an invaluable training step for the complete martial artist. Beginners, and this includes those enamored of the MMA ‘punch and die’ mindset, should realize that the lessons learned in this rigid technique will realize much fruit as one travels through further evolutions of the technique.

In the following technique a simple ‘slap and grab’ establishes much more workability, and shows how the technique can be developed more for the street. 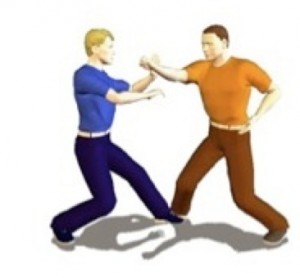 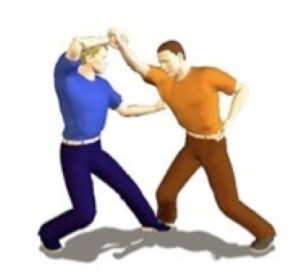 The attacker launches a right fist, and the defender slaps the fist inward with his left hand (a very intuitive and natural move). 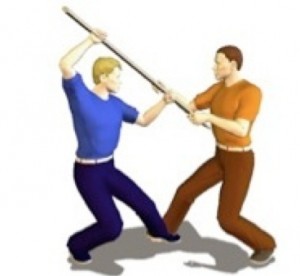 The defender then grabs the attacker’s wrist and pulls upward, emulating the high block, while executing a short, sharp jab to the ribs.

This variation has to have pin point accuracy and the ability to develop short power, and defends the need for spending much time studying the preceding and more classical techniques. 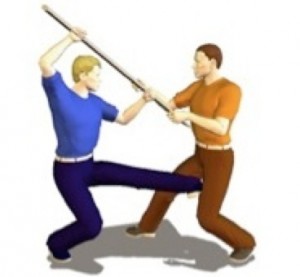 Obviously, one can alter this technique in many realistic ways,  especially when setting up hard blocks and then transitioning into the softer block and counters. 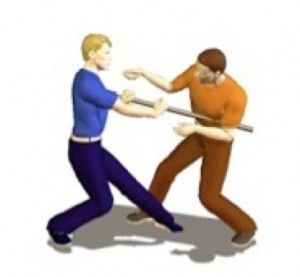 Lastly, one must not forget that the Japanese arts from which such movements as this came from were originally designed for defense against weapons (armed Samurai). Thus, the following technique will be adapted for a simple overhead strike with a pole.

The kick is gratuitous, and delightfully taekwondo. Grin. 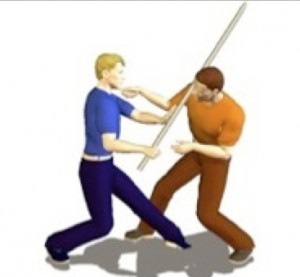 The trick to taking the pole away is to execute sufficient leverage that the attacker’s wrist becomes bent and unable to hold onto the pole, then circling the pole out of his grasp and using it against him is possible.

It is difficult, it is going to take work, but it is a technique well worth working on.

In closing, there are dozens and dozens of potential techniques in this move, and time spent exploring options is time well spent. After all, how can you say you really know a technique if you haven’t explored every single angle, every single counter, every single combination which includes the movements.

Thus, one should take each movement of their art and explore it through hard and soft potentials, through a variety of weapons applications and disarms, through combination with every other move of their art.

To do less is a waste of time.