When one studies Shaolin Kung Fu, they may eventually notice that everything is random. If you examine the forms you will see that the techniques flow one to another without any real logic. Simply, the whole system is a put together. 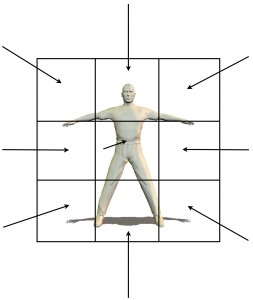 There is nothing wrong with being a put together if the system works, and Shaolin does work. But I am concerned with another factor entirely. I am concerned with how long it takes for a student to make their kung fu training  into a combat effective art.

The big problem here is that the kung fu systems have become large and unwieldy because for centuries people have been adding to it. After a while, the additions become top heavy, the system becomes huge and unwieldy, and the whole thing becomes too much to absorb. Then it takes a long time to learn, and when you do learn it, it is not always practical for real combat.

So, how do we rework this unique Kung Fu style so that it retains its spirit, but is ten times easier and faster to learn? The method, which I call Matrixing, is very simple. You simply use logic.

The way to explain the science of Matrixing is to take one item of the system and make it logical. In this article I’m going to use footwork. Inside one of the Shaolin forms I found a footwork which is quick, logical, only six steps, and yet covers virtually every potential of motion. This footwork illustrates forward, back, side to side, and diagonal.

In reconstructing Shaolin I took this footwork and began exploring the potentials of arm motion. Up, down, forward, back, left right, circle one way, circle the other way, either arm. Then I put the footwork pattern together with the various arm potentials and, voila, fast and easy–and true to the root–Shaolin.

Now, it was not as easy to make this thing work as it is to read these words. Go through your own systems and look for the magic combination of footwork and logic that I have described. When you realize how difficult this task is, you will start to understand how what a unique breakthrough Matrixing is.

I named the system the Shaolin Butterfly. It is derived directly from Shaolin, and it is quick and easy to learn, and it is fast and powerful to use. The motions are light and flitting and ‘kung fu-ish,’ and, of course–big grin–one just has to know that the butterfly is the deadliest of all Shaolin Kung Fu animals.