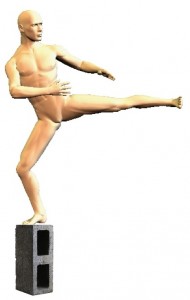 Try this exercise for delicate, yet powerful kicks!

Of course, kicks take a little extra effort to make work. But if you take your time and do learn the types of kicks in the proper order…you can have power popping kicks of the first magnitude. That said, let’s discuss the proper order of kicks.

The first kick is merely stand and kick. No stances, you can even put your hand on the wall, and  do them moderate speed. The idea here is to look at your legs and how your body has to move to generate them.

The second kick is going to be out of stances. Take a simple front snap kick, groin level to begin, and learn how to apply it from the rear leg in a front stance. Go through all your stances, kicking with the foot you are not standing on.

The fourth kick is to explore the direction you are kicking in. This is going to require some quick contortions of the body. Simply do the third kick, described in the last paragraph, but this time kick first north, then set up and do the kick to the west, then the east, then the south.

Now, some things to remember as you go through these four stages. Don’t be one of these ten kick and quit people. Do a hundred kicks, two hundred, three hundred.

The idea is to make your legs as agile as your hands. So practice your kicks and learn how to do a lot of relaxing. Soon your taekwondo kicks will be light and easy, second nature, and able to end any fight with a mere flick.