A Karate Mistake to Learn By!

A student recently asked me why Karate became popular in Japan, when the Japanese had their own Martial Arts. The answer to this question is in an historical incident. And, the answer reveals something rather shabby about the human nature. 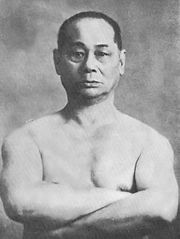 If you’ve ever watched a Chinese Kung Fu flick, the plot will invariably turn to the infamous western boxing match. The boxing match did occur about 1900, though the results were invariably not as the movies would have you believe. Indeed, the whole incident actually exploits the common mans need for myth and legend, and a way to bolster up a sagging belief in oneself.

That said, one of these infamous boxing matches occurred in Japan in the early 1920s. An Okinawan by the name of Choki Motobu was in Japan. He was descended from a royal family, was a brawler in his youth, but had studied much Karate.

Motobu was not too successful at business, accounts have it that he was out of work and broke. A friend convinced him to enter a Western Boxing contest which had offered to ‘take on all comers.’ Motobu was 52 at the time.

Accounts of the contest vary. Some have Motobu evading the taller western boxer for several rounds, then pouncing in and knocking out the Russian strong man with one punch. Other accounts claim Motobu kicked his man in the groin, and when the fellow bent over in agony, struck him with an even fouler (?) blow.

Whatever the truth, Motobu was the winner, and the crowd went wild. The press, anxious to report on this upset and vindication of race, searched frantically for an image to run with the story. They came up with an old file image of…Gichin Funakoshi.

Thus, the tale of why Japan became enthralled with Karate may have more to do with dirty fighting, lazy reporting, and a people in search of a superior identity, than with any superiority of art. That said, however, this writer makes no indictment of Karate, nor does he hold any martial art as superior. That is not the point to be made here.

This is merely a history lesson, and a revelation concerning mans poor self image of himself, and how that image can be exploited. When you hear somebody claim that one art is better than another, one should consider the tale of Motobu Choki and why Japan chose Karate as a ‘national art.’ And that is how Japanese Martial Arts were supplanted by a One Punch Karate Mistake.