Using Karate to Break Boards with Your Head Really Good!

Okay, to break boards with your head we need a warning, like check with a doctor before you do this. Or maybe a psychiatrist. Or maybe just make sure you’ve backed up your brains on hard drive. 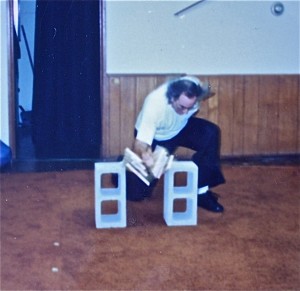 Back in 1968, I had just started Chinese Kenpo Karate, one of the Ed Parker offshoot branches, and the head instructor decided to put on a breaking seminar. I don’t know what he was thinking, I don’t think he had a side business selling insurance. At any rate, the potential for mayhem was lurking.

We entered the karate dojo and stacks of pine boards were waiting for us. As a group we were taught the theory of focusing, of punching through, and so on, and we were all excited. Then we started breaking the boards, one at a time, as the head instructor watched.

One of the students, a fellow named Jeff, asked if it was possible to break a board with your head. The answer was yes, but it shouldn’t be attempted until one was well trained. We then went into another room to break boards, and none noticed that Jeff stayed behind.

We were in group discussion, and suddenly there was a tremendous thocking sound. It was such a unique sound that we all stopped what we were doing and stared at the door to the other room. The other room, where the sound came from, where Jeff haws.

Suddenly, Jeff appeared in the doorway, he was standing aslant, and the look in his eyes was like little birdies singing. We all held our breaths as Jeff crossed the room, walking aslant, the birdies circling his head in a neat, little circling pattern. Jeff settled, well, sort of plonked, into a zen seated position, and the head instructor, with an eye on Jeff, continued his speechifying.

Now, if you’re going to break a board with your head, and I don’t care if you study Goju or shotokan or Hung Gar or whatever, work up to it. Start with thin boards, even an eighth of an inch, through a quarter, through 3/8s, and so on. Heck, even wear a football helmet the first few times, the potential for injury is that great.

Oh, and at the end of that seminar that I was at? Jeff came up to the head instructor when it was all over and asked, ‘is it possible to break a board with your head.’ Maybe he should have worked on having the hardest punch instead of just a hard head!

Al Case began his study of Karate in 1969. Take advantage of his 45 years of knowledge. Check out Temple Karate at Monster Martial Arts.