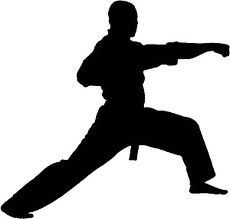 Now, there are quite a few differences between traditional Karate and the Kang Duk Won, and I could go through the various stances and point to various things having to do with structural alignment and the correct way to achieve it. But that is included in ‘The Master Instructor Course,’ and I would rather point to a single instance that may be more significant.In my forties I was practicing traditional Karate punching, and I discovered, one day, that when I did a full power punch I was getting a headache.

But I don’t get headaches! Hadn’t gotten headaches for years! So I began examining what I was doing.

When I was punching in Karate I was using so much force that I was actually giving myself whiplash. Simply, the force of the punch, the shoulders and neck being jerked, I was getting whiplash and a headache.

Hmm. Something wrong there. But that was the way I had been punching for decades!

Well, my body was getting older.

I could make it stronger with calisthenics, perhaps reduce and defeat the headache phenomena, but…I didn’t want to do calisthenics! I wanted to do Karate!

So I changed the way I was doing things. I simply started punching less hard, and focusing more snap into the wrist, and I found out something interesting: less effort was giving me more power!

Now that was odd, to say the least! How could punching easier make for harder punches?

My instructor once told me: ‘A tight fist is a heavy fist.’ But I hadn’t understood it! He actually meant that I should tighten only my fist! Not my whole body!

So I began doing Karate keeping my frame loose, not tightening the whole thing upon impact, but only snapping the fist.

I learned how to keep the tan tien taut so it could take a punch, but not to make the belly tight. And I found that this type of tautness enabled me to send chi out into the rest of my body more efficiently.

I learned that tightening the body, as in the traditional methods, locks the energy and reduces motion…and the circulation of chi.

And, I learned how to snap so efficiently that I could put out a candle from over a foot away. I detail that, and show the video, in ‘The Punch.’

Isn’t it funny how we listen, but don’t learn? Fortunately, if we keep practicing, the words will eventually make sense.

And that is the difference, at least on one simple level, between traditional Karate and the Kang Duk Won.

Here’s where you sign up for the Kang Duk Won!

This has been a page about traditional Karate.

3 Responses to Differences BetweenTraditional Karate and the Kang Duk Won