From Martial Arts Tournament to Full Contact Fighting to MMA

When it comes to Martial Arts Fighting, the times have changed, and changed again. 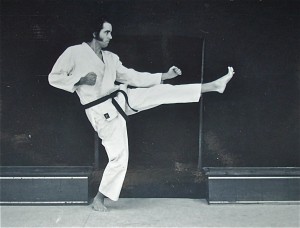 Training for a martial arts tournament in 1974

When I first began Chinese Kenpo, back in 1967, you were expected to have control. Develop your power, but have respect for your karate opponent. We were all very careful, and we learned what hurt and what didn’t.

Full contact didn’t work very well. A good boxer would go in and clean up. He had superior training methods for that specific form of fighting, and he had better conditioning. The karate tournament fighters didn’t really understand about this type of impact.

I remember watching some of the early fighters, and to hurt their opponent they would hit with ridge hands…on the wrist above the glove. No padding, and it worked better. Nobody figured out elbows.

But such factors didn’t matter. People want instant gratification, and full contact answered the call. A knock out, you see, is like a home run; people want to come to see the knock out.

So full contact had arrived, but its progress was slow and spotty. There were fights over rules, fighters tried to skew the rules so they would have an an advantage, and nobody really knew what was happening.

Then MMA arrived. Mixed Martial Arts. And the world changed. Training methods sharpened up, rules became more set in stone, and the real art was re-introduced. The thing became not a downgrade of bad karate, but a side step from good jujitsu.

The odd thing is that, for all the blood and teeth spilled in the ring, people much prefer no contact training methods, or at least very limited contact.

Yes, they want reality, but they don’t want to get mugged on the way to it.

And, one very interesting fact: people are finding out that there is more to learn when doing the older less contact artforms.

When you get into it with an opponent in many mixed martial arts schools, the contest tends to degrade, turn into a fight, a controlled fight, but still a matter of who is better.

This is in opposition to one perfecting one’s technique, which is what the true martial art is really all about.

Still, this last manifestation of lessened martial art is but one more signpost on a constantly evolving facet of martial arts training. From Martial Arts Tournament to Full Contact Fighting to MMA to…beyond, this is a sport that is evolving, growing, adapting…and getting better.