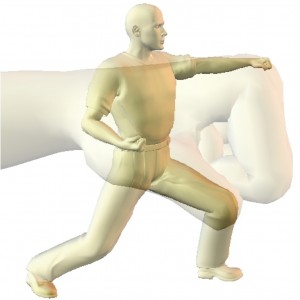 I Love Teaching How to Punch Hard!

I love to teach how to punch hard. I have always loved the idea of the tight fist, the punch that knocks ’em over, the fistaroonie that does the job. But teaching it is another high altogether! 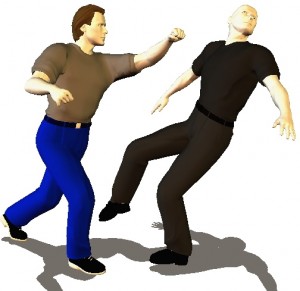 The Hardest Punch in All the Martial Arts!

I usually start people off with Matrix Karate. It is logical, there is no mystery, and it is fast to teach. And, the most enjoyable part is teaching somebody what a real punch is.

Last night I had a fellow take my class, and he had an assortment of experience. He actually knew a lot, but the information was all jumbled, out of order. So first thing I do is have him hold a bag, and I punch him.

The eyes go wide, he is slammed back, and he knows something unique has happened for one reason…no effort. I don’t grunt or groan or muscle up. I just get the job done.

Now, here comes the fun part. I tell him what I have done, I show him so he can understand, and then I hold the bag.

People take from 30 seconds to 30 minutes to figure it out, and this guy was smart. His first punch knocked me back a couple of feet.

There is something so downright addictive about smacking the you know what out of something (a punching bag with full body weight behind it). It makes the whole art come alive. I tell you, Karate has gotten a bad rap. A lot of people think it is for kids, or tournaments.  But it ain’t so.

Heck, hold the bag for me, I’ll bounce you across the room so fast your head will whiplash. And then I’ll show you how. Thirty seconds of the correct information, and I’ll teach you how to punch hard. Guaranteed.

The Hard Punch That Will Knock Over an Elephant 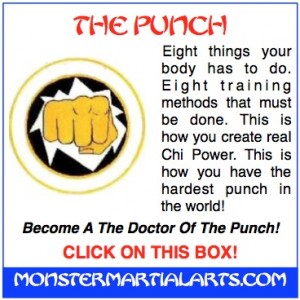 This knowledge is invaluable, never been written down before. But the reason I wrote it is not to give the comic book reader a way to steal lunch money, but to get people to dedicate themselves for a few months. If they do that, then they can see the benefit in devoting a lifetime to the martial arts, and here comes the one thing I should have told people.

You don’t need to do the punch a thousand times a day, but you do need to do it a thousand days. Sure, you’ll get the power in a couple of months, but that is just a shadow of the real power you can get. That’s just a teaser.

One of the fellows who first taught me didn’t have any method, he just heard that you could break bricks with your hands, so he set up a brick and hit it fifty times a day. He had to be careful not to bruise his hands, but he practiced, and he just kept practicing. When he couldn’t practice on the brick anymore, he would just practice in the air, and visualize the brick breaking.

He used to take a brick and place it on a fence post, upright, no brace of any sort, and snap a half fist into it. It didn’t just break…it shattered. I mean, the sucker almost exploded! And that was with four years of playing with it.

Can you imagine what that punch would have done to a person?

I had another instructor, and he would place a brick on a step and shear it off. He said the trick was in the timing, that you lift and lower ever so slightly so the brick was actually hitting the cement step at the moment of shear. Some trick, it still takes an immense amount of focus and concentration.

Concentration, that is the key, and that is why you do these tricks. No, Bruce was right, bricks (boards) don’t fight back. But the mental focus you gain in being able to shatter them stays with you your entire life.

Anyway, I recommend you get my book, The Punch, and get all the data. That way you won’t be flying blind. And then think about what I’ve said here. Put it together, then practice, slowly and surely, and within a couple of years you will be doing more than knuckling over elephants. You will feb shattering bricks with your hard punch.