Indian Warriors Guilty of Zen in their Martial Arts

Were the Indians Masters of Their Own Brand of Zen?
part two

What a GREAT day!
Of course,
if you don’t work out,
you probably don’t really know what I mean.
Grin.

This is the second of a five parts series.
Subscribe to this newsletter to get all five parts.

Last newsletter I made the point
that the American Indian
was probably the finest warrior in the world.
To back this up,
simply consider their attitude towards that great zen concept…
silence.

In zen you create a silence so absolute
that your spirit can manifest,
that the truth of you becomes apparent.

Indians had this zen attitude towards silence.

The mere fact of walking,
as described in the first part of this series,
can be used to create silence.
But that is only the first stage.
Perhaps some of you remember an old adage
that only fools whistle?
A bit harsh,
a happy person should whistle,
but when you are hunting game,
or sneaking up to a battle,
you can’t whistle.

Instead,
you have to master the sounds of nature,
the tweet of a bird,
the call of a wolf,
the actual sound of shifting sand,
or wind in the rushes.

To master such sounds requires an appreciation of silence itself.

Consider this bit of zen:
it is not the sound you must hear,
but the silence.

Or,
as I am fond of telling students,
a candle in a coal mine
is brighter than the sun at noon.

Consider this when you are doing Tai Chi,
and don’t make a sound.

Consider this in Aikido,
and don’t let your circles make a sound.

Consider this in Karate,
or Tai Chi,
or other arts,
and quell the sound of your motion,
of your technique,
it is not just wasted energy,
but it distracts the mind
from the silence necessary
to manifest the spirit.

Here’s a link to Tai Chi,
which is a great art for pursuing silence.

and have a great work out!

Remember,
Google doesn’t like newsletters,
so this is the best way to ensure you get them.

You can find all my books here!
http://monstermartialarts.com/martial-arts/

The Three Geometries of the Internal Martial Arts

When one is defining the Internal Martial Arts they are, of course, speaking of Tai Chi Chuan, Pa Kua Chang, and Hsing i. These arts are considered soft, and they are designed to build chi power. Interestingly, while there is similarity, there must be difference, and the differences can better be understood by examining the specific geometries of each fighting discipline. 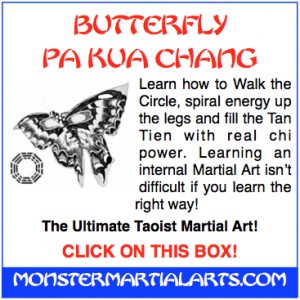 Tai Chi Chuan is the art that most people know of. It is done slowly, and attention is paid to the circulation of chi through the internal organs. This gives a ‘body of steel wrapped in cotton.’

Then there is Pa Kua Chang, which is a circular art in which chi power is said to spiral through the limbs and torso.

Last is Hsing i, which is more straightforward, developing the soft, internal power fist.

Now, Tai Chi doesn’t go anywhere. One deals with an attacker with subtle motions, not giving way, but rather redirecting force, then utilizing one’s own power.

Pa Kua goes in circles, which is a lateral motion.

Hsing i comes straightforward, more of an aggressive attacking sort of art.

The point here is that Tai Chi is the point on the ground, Pa Kua, though circular, describes sideways motion, and Hsing i creates forward and back motion.

Thus the three geometries create  plus, or a cross.

While this is not mystical, it does tend to create three methods of combat strategy which, when put together, create a wholistic fighting method.

If the attack is delivered with irresistible force, the tai chi student can shift to pa kua and move aside.

If the attack is not aggressive enough, one can shift to using i and mount a quick but penetrating attack.

Thus, fight or flight, slip or shift, the student who knows all three arts will have much more combat potential than the fellow who doesn’t. And that is the summation, be it a sketch it should still be handy in the overall viewpoint, of the three geometries of the Internal Martial Arts.