The Difference Between a Martial Artist

Speaking of Martial Arts, my brother had possibly the lamest joke of all time. He would ask, ‘What’s the difference between a duck?’ And, the answer: ‘One leg is both the same.’

And, having contributed possibly the lamest entry in the history of martial arts writing, and maybe of writing of all time, let me explain the difference between a martial artist. 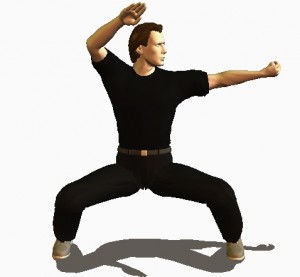 Are you good or bad as a martial artist?


On the bottom you have sleeping dreams, which are usually just a confusion of memories.
Simply, people without martial arts go to sleep and they have weird dreams as the things they have experienced in life try to fit in with the jumble of their memories.

On the top you have the ethereal universe, or ethereal plane. This has been spoken of, and you can do some research, but you’re in for a real egghead time. So let me just clarify it as simply as I can.

It’s where you decide to win the fight with one punch…before the punch is thrown.

Since the idea of deciding to win or lose before the action even takes place is important in the martial arts, let’s explore this concept of dreams and ethereal existence from the viewpoint of emotion.

A person at the bottom has emotion. Anger, fear, rage, and so on. Simply, he is manifesting emotion hopelessly. He can’t deal with it, so he expresses it. He externalizes it in a vain attempt to give it away.

A person who has found the ethereal universe will have no emotion. Having no emotion, however, does not immune a person from such things as joy and love and so on. Joy and love and such things, you see, are an expression of spirit, of the actual soul.
People experiencing emotion think they are experiencing emotion when they encounter joy, for instance. But the actuality is that they have done without emotion and are now experiencing themselves. Brief, but true, and then emotion snags them down again, and they don’t understand the lie that has been perpetuated upon them by their misunderstanding of what actual emotion is…and what the attributes of the human soul are.

If you experience emotion, and would like to find the true martial art that trains you to control your emotions, and thus reveals the true martial art, then pop on over to MonsterMartialArts.com.
If you would like to explore such concepts as the Ethereal Plane, then head on over to ChurchofMartialArts.com. Be careful, though, because without the discipline of the martial arts you won’t really understand what is being said there. You just think you will.